Lich are one of many races occupying the Poxnora universe. Lich are found almost exclusively on the Forsaken Wastes faction, with only 2 noticeable exceptions, the Demon Lich at the Underdepths, and the split Hero Voil King Ruubgaal. Lich is a primary Race, and also a theme on its own, as next to all the champions with this race include the ability Evil Aura, except for the champions from different factions to Forsaken Wastes. Many champs with Race: Lich have Class: Wizard, and Damage Magic, althought there is a great variety in both aspects.

Serkan, Lich Master is considered the true leader of the Forsaken Wastes, and perhaps the most powerful necromancer of the entire world. The reason for the existence of another champion with the name Lich King is because, according to the lore, Xulos, Undead Sage, once apprentice to Serkan, conspired to take all the power for himself.

To achieve this, he attacked and banished Serkan into the utterdark, and create a fake double, the Lich King, in order to rule from the shadows.

Eventually Serkan would return from the Utterdark with some new allies (most spirits with the word 'Utterdark' on their name) and retake his position as ruler of the Forsaken Wastes, until the events of the Bonds of War expansion, which implies Serkan went missing once again, for unknown reasons so far. Xulos took the chance to be the ruler once again.

The following Abilities, Spells, Relics, Equipment use the term Lich:

Table of all Lich Augment 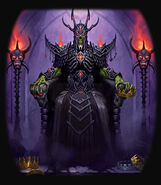 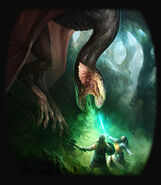 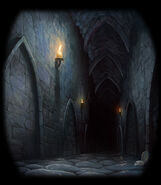 Add a photo to this gallery

Retrieved from "https://poxnora.fandom.com/wiki/Lich?oldid=15006"
Community content is available under CC-BY-SA unless otherwise noted.